Recently, people have been building more small systems with tiny cases from 4ms and Intellijel. We thought this was pretty cool, as it can be a good way to start out in Eurorack, and a great way to use modules you already have differently, even if you’re deep down the Eurorack rabbit hole already. So in this post, I’m going to talk about some small configurations that fit in a 60hp case, what considerations to take if you’re thinking about building a small system, and, of course, make some patches.

Just to undo everything I just said, this may not be the best way to start out for you

Once again proving I’m an ever-reliable source of consistent information, building a tiny system may not be the best way to start out in Eurorack, for a few reasons. First, small isn’t always a good thing: tiny modules get hard to patch. There’s also some stuff you just plain can’t do in a small case: you’ll be hard pressed to fit multiple voices and sequencing into 60 hp (though we do this later), and some modules are just too big to make sense in a tiny system. There’s also the factor of expansion: I started with 84hp a few years ago and had to very quickly upgrade to 168, then 336, now I have almost 1000hp filled… you get the picture. If I’d started with a larger case initially, I would have saved a bit of money down the road. That said, if you’re looking for something portable, just need a house for a few modules, or like the idea of a small case better than a room-filling behemoth of a system, read on!

There are over 7000 modules on Modulargrid. That’s a lot to choose from. Getting a plan together is important for a small system. Think about what you want this small case to achieve. For instance, if all you want is a drum machine, you’ll probably want more voices and less modulation. If you want a monosynth, you’ll want to dedicate a lot of space to your envelopes and LFOs, filters, oscillators, and everything that ties them together. You need to have a good concept of what functions need to be present in your system before you run out of space. Whatever it is you want to do, make a general plan before you go shopping. Don’t know what you need? Ask questions, watch videos, read our blog, and reach out to manufacturers with questions!

In a portable case, you’ll probably want a way to mix all your sounds together and connect to a pair of headphones or something like that. I didn’t include one in any of these systems, but something like the Xerest Pola works great for this sort of small case..

THE SEQUENCES ARE COMING FROM INSIDE THE CASE

We have one last question to ask before we start planning out a case. Do we want our sequencer to be within our case, or do we want to use something external, like a Beatstep Pro? Putting your sequencer outside the case saves us a lot of real estate, but also gives you another piece of gear to carry to and to plug in at the gig, or the coffee shop, or the park, or the experimental meditative sound-trance you’re playing next week. There’s ups and downs to every choice.

can we put together a system already

Sure! The first system we’re going to look at is an all-NE special. We’ve got a little of everything here: two voices (Basimilus Iteritas Alter, of course), some sequencing (both triggers from Bin Seq and CV from Mimetic Digitalis) and a little bit of distortion, too. This would be a fun one for jamming on some percussion, some industrial basslines, or just some simple synth sounds and rhythms. We could use the techniques we talk about in MD for Presets to really extend the capabilities of this system, too. Horologic Solum can drive all the sequencers in there with the help of a mult (like the Hosa Knucklebones) and since we can get some weird divisions out of it, we have room for some cool variation even with a simple patch.

Actually this system probably wouldn’t be very noisy, just Noise Engineer-y. This is a single voice system based around the Cursus Iteritas Percido, one of my favorite voices of ours. It’s really expressive and can be quite gentle if you want it to be. We have a Bin Seq again, driving whatever rhythms we want to make, with Vox Digitalis as a pitch sequencer. We also have my favorite sequencing combo: the Mimetic Sequent and Mimetic Multium. This is a great addition because we can, for instance, record and randomize a sequence from Vox Digitalis, or create completely new CV sequences. We also have four random trigger outs, which can be used with Pons Asinorum to create some more modulation. PA can also be four LFOs, if we want, and paired with Sinc Defero, we can easily control that modulation to make CIP do something pretty. Kith Ruina is a nice final stage for almost anything: we can do some saturation and distortion, or just add some EQ.

And now for something completely different (note: no parrots were harmed in the making of this system)

All those complicated systems are fun, but what if we just want a simple subtractive voice? Let’s do it! Let’s start with oscillators. There are a LOT of oscillators in Eurorack. I went with the Instruo CS-L: it has great basic waveforms, gorgeous sounding sync and lots of PWM options, but it’s also a complex oscillator, so it lets you go far beyond basic tones. If you don’t want something so complicated (or big) there are a lot of other options. I really like Doepfer’s oscillators: they’re relatively cheap, and I like their sound and simplicity.

Next we have the SSF Quantum Rainbow 2, which gives us a bunch of different types of noise. A lot of subtractive synths have a white noise oscillator, and this gives us that, plus a plethora of other options. Noise can be used for a lot of things: I tend to use it to add some high-end to a synth voice, but you can use it for background elements, percussion synthesis, and a whole lot of other things, too. Obviously, we need to combine these three sounds together, so we have the STG Sound Labs .MIX for that. It’s based off a Moog mixer and is not clean, like, at all, which I like a lot.

To the right of that we have a filter, the Bastl Cinnamon. Now, this is another place in Eurorack where there are a lot of choices. The Cinnamon is one of the first filters I ever got and it’s still a favorite of mine, but you might consider other choices too: the XAOC Belgrad is nice, and has a lot of different modes if you want some variety. There’s also the Intellijel Polaris, which gives you pretty much every type and slope of filter you could want. We make a filter called Viol Ruina, and it’s TINY and pretty inexpensive, too, if you want to dedicate a lot of space to, well, not filtering. Doepfer also makes a variety of inexpensive filters that model a lot of older synths, too. There are a LOT of filters in Eurorack, so I suggest finding one you like the sound of and grabbing it. It’s pretty hard to go wrong.

Second to last, we have the Minimod Contour Generators. In my opinion, the most important part of a synth is the envelope (weird, I know, but I have my reasons). I really like this envelope because it has a weirdly musical retriggering behavior (if you trigger it quickly in a short period of time, it spits out a higher amplitude envelope than if you trigger it slowly) so you can get some interesting and expressive results from it depending on your sequences.

And finally, we have Seca Ruina. Why are we ending with a distortion, you ask? SR has a VCA on its output, so we can patch it to be a gentle distortion stage and be our final VCA. This system is actually really close to a patch I use all the time in my own system (I use a Rossum Trident and Evolution instead of the CS-L and Cinnamon, but same idea) and it sounds REALLY good. I’m not a huge oldschool subtractive fan, but Seca Ruina gives it a weird (in a good way) aggressive edge that I really like.

Let’s hear that one

Here’s a patch! We’re just playing a basic sequence and playing with the filter parameters. Simple and fun.

I don’t patch like normal people, so here’s what I’d use.

There’s no wrong way to make a system (well…), and I like to patch a bit differently than most people. If you’ve been reading the blog for a while, you probably know that I like the LIP a looooot. It’s great. It does everything I could ever want a synth voice to do other than make me dinner on Tuesdays. I also love my NerdSeq, because, again, I’m a huge nerd. It has 12 CV outs, and the LIP has, what, 18 CV inputs? So we’re not quite there, but we can still do a lot. The SSF Autodyne is a nice compressor, and even in a single-voice system, since we’re changing the voice so much, a compressor helps to bring out the transients on the more percussive sounds we’re making. And finally, Kith Ruina, because I just really like that thing. 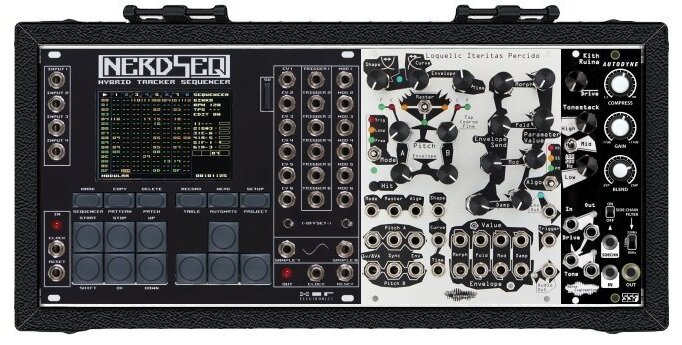 Here, we’re modulating a bunch of parameters on LIP to create a bunch of different sounds. LIP is monophonic, but we can still make a complex-sounding patch with modulation like this.

Show us what you got

Did you build your own tiny system? Want to show us a cool patch? Tag us on Instagram, or send us an email! We want to hear from you.

Edit: User Basketfullof Puppies shared a 30 hp (!) system with us that he has created. Behold, the "east coast" inspired monosynth...Noise Engineering style!

From Puppies himself: “It’s got all the basics: oscillator|vcf|vca|envelope with just a touch of distortion and plenty of modular deviancy.” 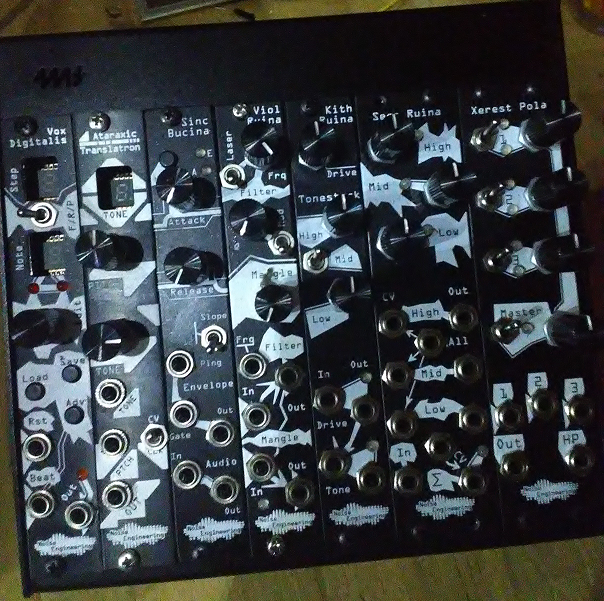