Markus here. We started a series a couple of weeks ago about percussion synthesis. We started simple, with kicks. Before we delve deeper, though, I want to go over some useful ideas and thought processes you should apply when you’re trying to design or emulate a sound with a synth. We’re going to be talking more about general concepts than a let’s-make-this-specific-sound tutorial, so apply these ideas to whatever you try to patch up next and see what happens.

A sound isn’t really a sound, it’s a sounds

Because that’s how grammar works.

So, let’s say we want to synthesize a snare. (Hold your horses. We’ll make a patch to do that in my next post, but here’s an overview of the process behind how we created that patch… from the future. Oooh.) When we think of the sound of an instrument, we generally just think about it in terms of “yep, that’s a snare drum.” However, that’s not helpful in terms of synthesizing or recreating a sound. Most sounds have to be built out of multiple parts, hence my heading. Here’s what we have to think about:

Contrary to popular belief, dynamics are important! In an environment like Eurorack where we have to shape the dynamics of a sound with voltage, it’s both a curse and a blessing: if we have a versatile envelope generator we can create a sound that responds exactly how we want it to. That also means, though, that we have to be really careful about what everything is doing and how it relates to each other. Dynamics of a note in a synthesizer are handled by VCAs and envelope generators. Let’s look at the general shape of a snare’s “envelope”:

There’s a huge spike at the transient where the stick actually hits the drum. Then, it’s pretty much just noise, and then echoes. This doesn’t really fit into the general ADSR paradigm that we see in a lot of synthesizers--more on that in a bit. In fact, to create this, we’d need two sets of envelopes and VCAs: one for the tonal part of the snare, and one for the noisy tail, since they’re very different lengths.

While we will need multiple envelopes, they can both actually be single-stage decay envelopes. Something like Pons Asinorum that has a lot of these is incredibly helpful for this kind of task. The envelopes in our Percido voices are also great for percussion since they have lots of curve shaping options, too.

Personally, I feel that envelope shape is about 80% of what makes a sound work or not, so spend some time getting to know envelope shapes, the envelope generators that you have (and their strengths and weaknesses; they all sound different) and how they relate to real-world sounds. We’ll talk more explicitly about envelope shaping in a bit, though.

This is the actual structure of the sound. Also very important! In synth land, this is handled by oscillators, filters, distortion, effects… you name it. Let’s look at what happens in that snare again, harmonically this time: 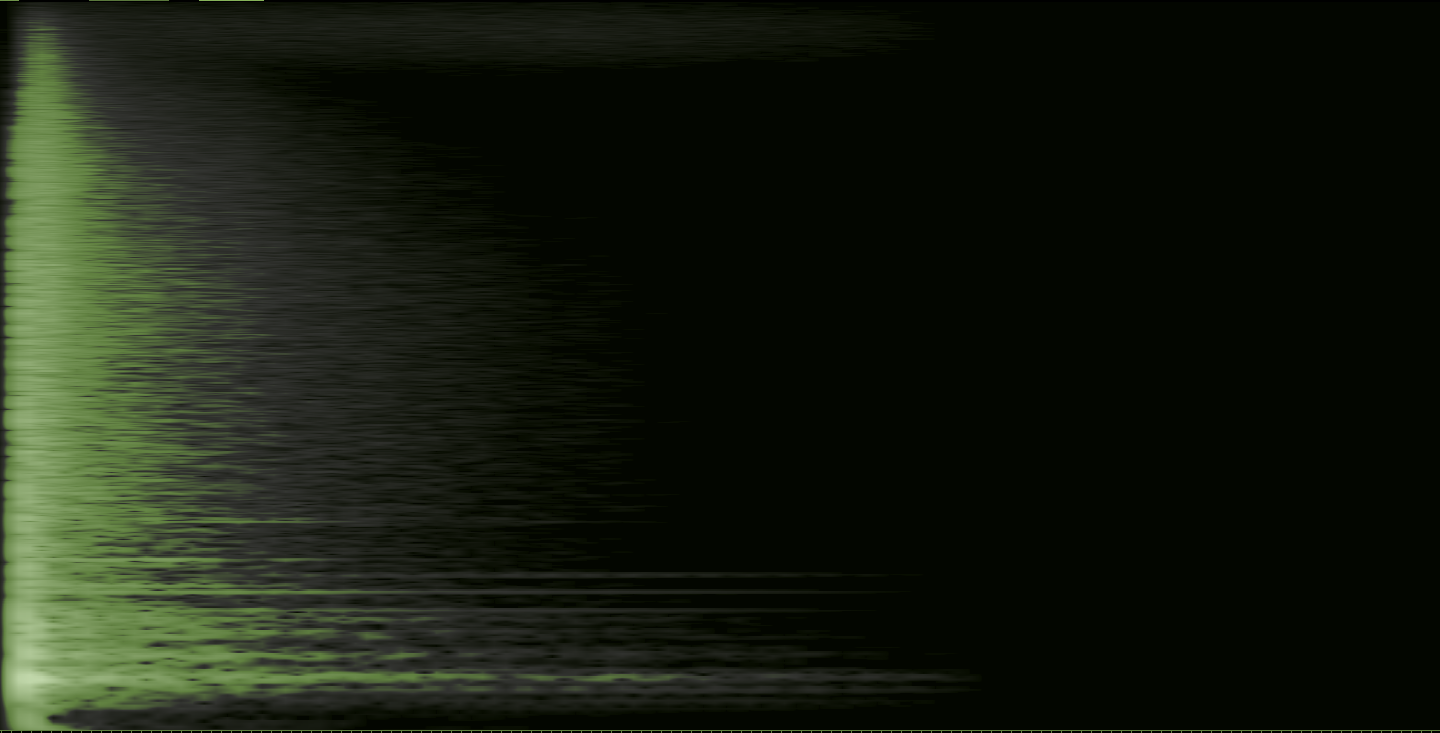 Once again, we see that REALLY BIG transient quickly decay, but in harmonic structure, not just in volume. As you can see here, snares, especially synthetic ones, contain both harmonic and inharmonic spectra: the drum head itself has a distinct tone, and the snares are basically just noise. Even being able to separate things into noise vs. a tonal oscillator is helpful when synthesizing something like this, just to get your brain thinking in terms of synths. Welcome to the world of taking reality out of reality!

Back to the whole envelopes thing: The most common type of envelope we run into is the standard four-stage ADSR. What’s funny to me is that, while there are many organic sounds and instruments that sort of follow a four-stage “envelope” in their dynamic shape, none of them actually follow attack, decay, sustain, then release.

Think about a piano. 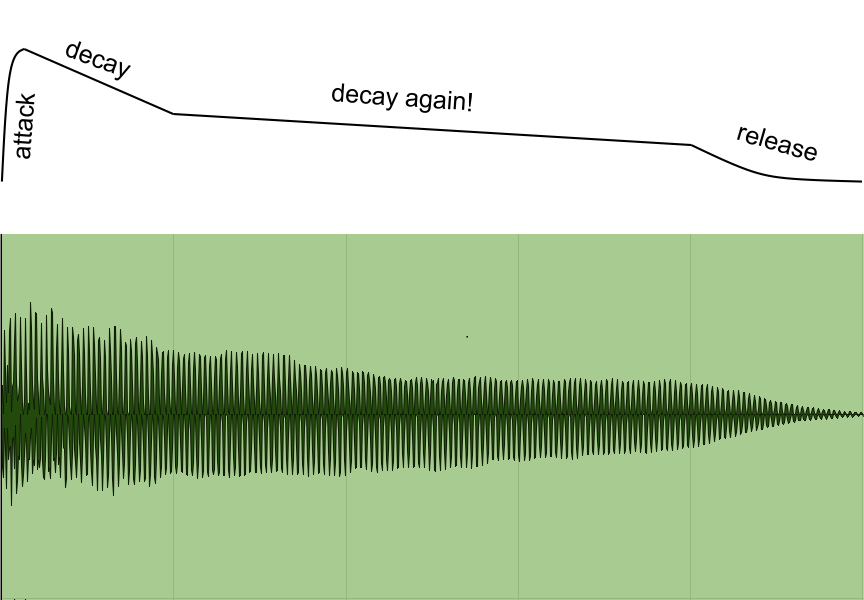 I mean, it’s not perfect, but you get what I’m saying.

As we can see here, the envelope isn’t very complex: there’s basically no attack stage (at least dynamically). It then decays quickly. In an ADSR envelope, we’d hit the sustain stage next, but think about how a piano sounds: it never really “sustains” like a synth does. As you’re holding the key down, the note slowly decays away into nothing if you hold it down long enough. In envelope terms, this means we would need an attack, a fast decay, and then another slow decay after that. Weird! The release after we let go of the key (in the last two segments in this waveform) is pretty short, too. So to create this we’d actually need something like an ADDR envelope which doesn’t really exist, sadly, but we can create things similar to this with complex envelope generators or by adding multiple envelopes together. And that’s just for dynamics: we’d need something similar but with different timing for the harmonic side of things.

Putting it all together

Let’s make some noise. Here I have a bass sample to analyze: 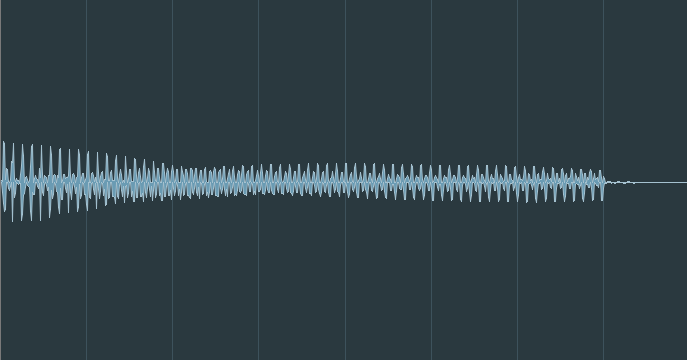 Lookit all the pretty waves!

First, the spectrum: not much going on, but we can see that there’s a bit of higher content where the bass is plucked and then it closes down a bit to around 500hz.

Next, the waveform: we’re loud at the beginning, decay to a sort of sustain, and then release almost instantly. Notice also there’s a bit of phasing-type behavior going on, suggesting we might want to use multiple oscillators , modulation, and/or filtering to create some movement in the sound itself.

Here’s what I ended up with:

I used a Loquelic Iteritas as my oscillator. There was just a little bit of modulation going on to create that movement that we saw; a plain saw wave would’ve worked pretty well too but I like having the extra tonal options of a complex oscillator like the LI.

Next, I ran the LI through my Rossum Evolution. The Evolution is a great lowpass filter with lots of CV inputs.

I then ran the output of the Evolution to my Intellijel Quad VCA, so that I wouldn’t just have a drone, of course.

Lastly, everything was controlled by a single complex envelope out of Stages from Mutable Instruments. I like Stages because it gives you shape control over each envelope stage which is incredibly useful.It was actually a five-stage envelope, and it looked like this: Super quick attack followed by a super quick decay to open and close the VCA and VCF to create a bit of a pluck, followed by a slow decay/sustain stage to emulate the vibrations of the string dying out, followed by a quick release. Straight forward but it sounds great!

Now that you have an idea of some (hopefully) helpful ways of thinking about sound, go try it out yourself! Patch up some sounds. Because that’s what synths are for. And if you make something really cool, send it to us on our Instagram page!