LI vs LIP vs CI vs CIP: The Oscillator Conundrum Strikes Back

With the release of Cursus Iteritas Percido around the corner (THIS WEEK!), we’ve received a few questions about the differences between the two Percidos and their counterparts. Let’s talk about it!

Loquelic Iteritas was one of our earlier modules and was created with both music and sound design in mind. It’s a digital implementation of the classic concept of a “complex” oscillator: two oscillators that modulate and interact with each other, generally via FM. LI takes this concept and implements three completely different algorithms: VO, an implementation of VOSIM, a type of AM that tends to create more vocal-type sounds going into a wavefolder; SS, or Summation Synthesis, based on an easy-to-compute mathematical formula which uses three internal oscillators modulated and summed into a wavefolder; and PM, a phase modulation/amplitude modulation algorithm with, once again, wavefolding.

LI can be hard to tame, but the results you can get from it are quite distinct. Given that it’s a multi-oscillator module, getting tonal results from it can be more of a challenge (but when you do it sounds awesome). Its algorithms are also relatively unique in the Eurorack domain, meaning you probably won’t get the same sounds anywhere else.

Cursus Iteritas, on the other hand, is a simple oscillator module with a much more gentle outlook on sound. Although it still has the option of wavefolding (like most all our oscillators to date), that’s where the similarities end. The general concept is to create sound by manipulating the harmonic structure of waveforms. It also has three modes: Fourier, which uses sine waves; Daubechies, which uses wavelets; and Walsh mode, which uses the Walsh transform. It can be very subtle, and if you take the time to get to know it you’ll be rewarded with infinite tonal possibilities sure to fit into any patch. It also responds beautifully to modulation, but more on that a little later...

Talking about synths is fun and all, but hearing them is, obviously, way better. Here’s a nice droney thing from CI+CIP. Pons Asinorum through Sinc Defero handles modulation for CI. CIP’s envelope is in loop mode, but instead of using the envelope out as a modulation source, we sent it to a clock divider (Horologic Solum in this case) to advance Mimetic Digitalis (supplying the melody and harmony lines).

Percido is the fun part! Modulation is, of course, one of the more exciting parts of Eurorack. The Percido line takes our oscillators and builds in an output VCA and an internal modulation matrix based on our unique take on envelopes… and it all started with the Loquelic Iteritas Percido.

LIP, while conceptually simple, packs a lot into its 20-HP package. To create something similar, you’d need an LI, a fully voltage-controlled envelope, an eight-way mult, six bipolar VCAs, a unipolar VCA, a lot of patch cables, and some very careful planning. You definitely save some time with the LIP as a package! 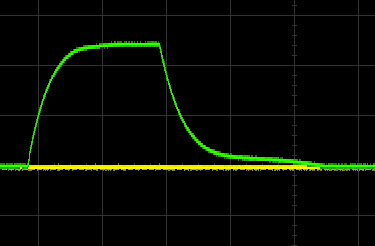 The RC (or Resistor-Capacitor) curve envelope from Percido oscillators!

The envelope is unique: on the surface, it’s just an AR envelope based on the classic RC curve. However, you have control over the envelope curve, attack/release ratio, and time, and all three are voltage controllable. The controls definitely aren’t laid out like your more traditional envelopes, but they lend themselves very nicely to automation and performance.

From there, the LIP’s internal modulation bus takes care of the rest: first, the envelope is automatically routed to the output VCA controlling the level of the oscillator, just like a normal synth voice. Bypass the envelope amplitude modulation by setting LIP to Free mode.

However, that’s pretty much the only standard synthy thing about the LIP. Each of the four tonal parameters (Morph, Fold, Tone, and Damp) as well as each oscillator’s pitch controls—remember, complex oscillator—has its own modulation-bus attenuverter, where the envelope can be routed either positively or negatively. This opens up a whole new world of sound design with many points of movement in a single sound, with dynamic and harmonically ridiculous results. It’s been said (by us) that the LIP is the Noise Engineering Lasers and Space Farts module. Of course it does so much more, but it’s also likely to bring a smile to your inner 12 year old.

The envelope sends also run through their own internal VCAs, so along with the parameters being CV-able, you can also CV the amount of each envelope send if you want to, too. Crazy!

While the internal sound engine is identical to the original LI, we find that its unique workflow lends itself to strikingly different sounds being created.

First, the differences: CI and CIP, like LI and LIP, are based on the same Cursus sound engine. However, astute observers may have noticed that CIP actually has one fewer tonal parameter than the original CI. On CIP, Structure and Tilt have been combined into the new Balance parameter. We found that they tended to work together as parameters anyway, but in addition, it saved us computational power we needed. And to be honest, we kind of ran out of room on the panel for another knob!

Like the LIP, the CIP takes its core synthesis from the CI, and simply expands it…and then some. CIP has the same envelope, VCA, and attenuverting envelope send structure as LIP. However, it also has the new Master Blaster, which works as a master attenuverter over CIP’s six envelope sends. Think of it as a performance-oriented macro control. Set fully clockwise, what you see is what you get: the envelope sends behave exactly as they’re set on the panel. At 12 o’clock, Master Blaster fully attenuates all envelope sends: it’s the equivalent of them being off. Fully counterclockwise, the envelope sends are fully inverted, giving you an inverse-but-related sound with just the twist of a knob.

But it doesn’t stop there: Master Blaster also has its own 0–5v CV out, meaning you can use it as a macro for your entire patch. Performable? Check. Great-sounding? Check. Lightning bolts? Check. CIP has you covered.

The choice is yours

Basically, like the LI and CI, LIP and CIP are completely different. They follow some similar design principles. If you’ve used one, you’ll understand the modulation routing in the other. Tonally, though, there’s very little overlap in terms of what you’ll get out of them. Try them both! We find they complement each other very nicely. Like in this patch!