This is part of a series of guest-post tutorials from Noise Engineering users showing off various tips for NE products. This week, we’re doing something a little different: we’re featuring a post from Kirk Markarian that showcases our recently released Rack Extensions for Reason. We’ve been dipping our toes into the Rack Extension world for a few months and last week released the newest installment, the Vereor series, which includes six Noise Eng oscillators with built-in low-pass gates and VCAs. Kirk was a beta tester and was kind enough to put some demos together for us, and then just kept on playing. Here we talk a bit about how he uses these and what draws him to Reason and the NE REs in particular. Think of it as sort of a written Song Exploder for Reason.

Have someone you think would be great to write a guest post? Have a modular tip you want to submit for us to create a video around? Please submit ideas for this column here. But if you’re that one guy who keeps writing me about doing a post about aquariums, don’t bother.

Kris: Tell us a bit about yourself: who you are, what you do in the world.

Kirk: My name is Kirk Markarian, and I live in Tucson, AZ. I spend nearly every day composing music under my own name and a variety of monikers (Neuro... No Neuro, Deuterostome, Aphasique, Frisée, co-workers). Each moniker is used to keep the different styles separate.

Primarily, I compose various types of music, and outside of that I am an abstract painter. I'm also a page-layout and vector graphic designer.

I'd love to become a full-time film, animation, or video game music composer. The competition is fierce. I have composed music for 23 video games, 8 films, and several pieces of animation primarily using Reason. Seeing that I've already made a nice dent in that direction, I'd really love to push into any of those fields in a more permanent manner.

In the meantime, I've found a new love, and that is composing music for commercial usage via Songtradr. I've just begun this in April of this year (2018), and have learned an incredible amount of information on how to mix my audio better (and will still be learning this for years to come). There are always opportunities to create music for projects on Songtradr, so I have created a variety of acoustic and synthetic pieces for that site.

KK: I talk to a lot of modular people who are not as familiar with Reason. We opted to start our foray into the software world with Reason because it seemed like a pretty obvious fit: it’s not a traditional DAW, but you can make your own patches right there in the program! To us, it is a great in-the-box home for modular users, and a pretty obvious way to begin to understand the software world since we knew we had a lot to learn (#workinonit). But Kirk, I understand that although you’ve explored modular synths, you’re not currently a huge modular user, so can you talk about what brought you to Reason and how you use it as a tool for your workflow? 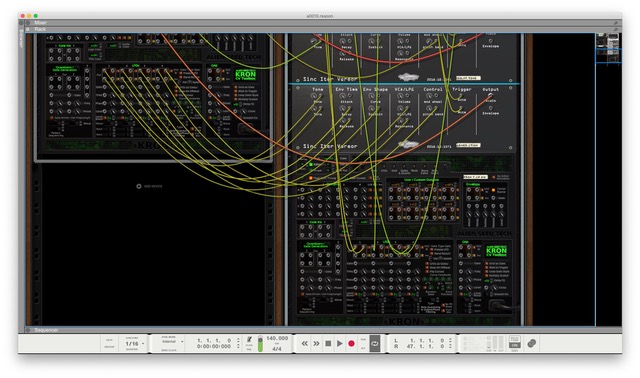 Reason has a lot of similarities to modular synth. In Reason, users build racks out of various components. These can then be connected for CV control on the back panels with “cables” or controlled by “hand” on the front panel.

KM: I love Reason for the familiarity of its controls and the way it focuses on synthesis. I compose all kinds of music in Reason, from synthetic to acoustic, and I prefer that it's not an ordinary DAW. It works like I use a studio in real life, patching things together to create new sound combinations and mixing them.

I used Reason from v1.5 to v3.x, paired with sound generators such as "Orangator" and "DrumSynth". Then, I took a break from computer music for a bit, and got back to computer music with Reason 7.0. During the time away from Reason, I studied abstract analog methods of synthesis, including modular.

Reason provides me an outlet to not only compose abstract music, but to also compose music of a more commercial nature. Reason supplies me with a method to create music for film, animation, video games, etc. and it keeps expanding.

KK: Cool. I loved the album you recently released that included NE Rack Extensions. Would you tell us a bit about that?

To start, I've found the sound of the Noise Engineering modules unique to others I've used, for a particular sound that I'm working towards. Reading up on the Noise Engineering modules sound-processing methods, they've combined digital forms of synthesis with analog control and behaviors. The way each module responds to CV is not only unique unto themselves, but to the sound they output. I can hear gradual, slight changes in the structure of each sound. With that, each piece I make tends to fluctuate every time I play it back from the sequencer. I enjoy the less static sounds that these modules generate.

KK: Nice! We are big believers in lots of CV control. On the modular versions, we do indeed incorporate a lot of digital control which made moving these into software somewhat (though not entirely) straightforward.

KM: a0010 is part of a larger collection of tracks for my album "isolation cube" on Bandcamp.

isolation cube is a combination of my love for the sterile, crisp, exacting sound of Max/MSP sequencers combined with my passion for shifting analog electronics. Using Reason as the DAW, neither sound is achievable on its own (so far), but a beautiful combination of the two has become possible with the Noise Engineering, Lectric Panda, and Alien Seed Tech REs. [ed note: we love LectricPanda, who does refills for our Reason products -- check them out on his site!]

The first thing I focused on with the Noise Engineering modules was to create a set of percussion sounds that I can recall at will. From bass to snare to hats and clicks/pops. Earlier, with the modules from "Synth Bundle 1", I had created a nice set of full-sounding bass drums, snares, and hats. With the addition of the Sinc Iter Vereor, I was also able to construct some shifting clicks and pops. Once I was able to gather a group of these together in a satisfactory manner, I created a Combinator and stacked all the modules inside of it, so I could set them up quickly with the Lectric Panda "Kompulsion" RE. Kompulsion has become my sequencer of choice for tight sets of sequencing tracks, with large amounts of random arbitration.

Once I have set up a pattern within Kompulsion, I then go around working the pattern to have an ever-shifting rhythmic set of higher-pitched percussive sounds, panned around the audio field. I work the sounds to get it as similar to granular synthesis as possible, while maintaining the tight timing of Kompulsion.

To get the rhythm to sound granular, I introduce CV modulation to the Noise Engineering REs via KRON, as it has 4 LFOs, a few EGs, and a variety of other modulation methods. I'll set the modulation methods to very small ranges to give it just a hint of fluctuation, emulating a "human" touch with a mechanical "feel". Sometimes, though, I'll be a bit more heavy-handed with the amount of CV I let through for a set of cutting FM buzzes and other timbral effects.

Next, I also created a melodic sound using the Sinc Iter Vereor as I wanted something that sounded even more digital than some of the other modules. The pattern and note selection was also set up in the Kompulsion sequencer, and heavily modulated by the KRON utility. Looking to make the tone even more digital, I ran it through the kHz Bitcrush effect, for a lonely sound.

Using the Reason sequencer as a controller for CV and channel functions, I created a variety of on/off and pattern triggers to flesh out a pretty, wistful, short track. 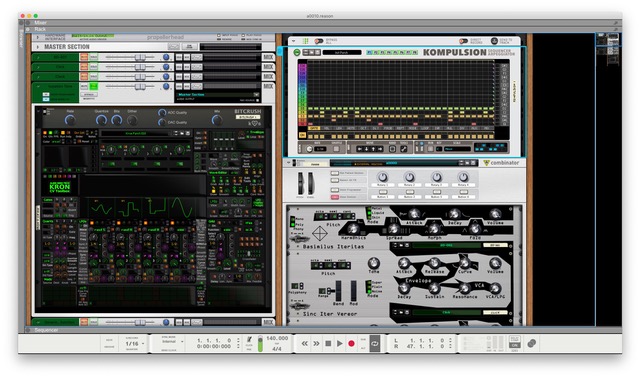 KK: I love this track. It comes together in such a lovely way. But there’s a lot of tempo change, most obviously at the end. I know some Reason users have struggled to find ways to do this (and others have used it to beautiful success). Can you talk a bit about how you incorporate the tempo change?

KM: After mixing the track to my liking, I then applied the BuffRE Beat Chopper to the overall track, for upsetting the pattern(s) and shifting the timing around a bit, while actually maintaining the original tempo. I try to give the track a slightly modern DJ feel with BuffRE, but also with a feeling of slight AI randomness.

Like this piece? Find more by Kirk on Bandcamp.

Interested in the Noise Engineering Rack Extensions for Reason? Check them out here.