This week we’re happy to have our friend Corry Banks on the blog. Pioneer of the Modbap community and movement, Corry (aka BboyTech) coined the term Modbap as a representation of his (frankly awesome) experiments in blending hip-hop and boombap production styles with modular synthesis. As the founder of both BBoyTechReport.com (Music tech blog for Beatmakers) and Beatppl.com (Music and sound design label / brand), BboyTech focuses on assuring the voice of hip-hop is present in music technology by combining his passions for hip-hop music and his experience in technology into a platform for like-minded individuals and peers. Since then, his innovative contributions in Modbap have nurtured a movement in experimental modular synth based hip-hop production.

But that’s not all. Corry has just announced his brand new modular line, Modbap Modular. This week, we talk to Corry about his background and what brought him to modular, his upcoming module, the Per4mer, and check out the Per4mer in action.

Kris Kaiser: Tell us a bit about your musical background.

CB: Well, I have no formal training. I really wanted to take up piano as a kid but we just didn't have the resources for it. But I had family members that were beasts on their instruments. My uncle was a jazz trumpeter (he’s crazy with it), my brother played trumpet and drums, even my nephew is an incredible self-taught guitarist. It’s all had an influence on me but the reality is that my passion was in being an Emcee early on. I only started making beats and such when I couldn't find the synergy I was looking for in a producer. So, around 2000, I started making beats with an MPC 2000 XL and a couple of synths. I’ve not looked back since.

KK: what do you love about modular/what brought you to modular ?

CB: For me, modular synthesis represents music and nerdy technology so despite my initial apprehension I was very “modular curious.” I’d already founded Bboytechreport (tagline - the intersection where technology and hip hop meet), so modular synthesis resonated with me in that same way by bridging tech and music. Also, as a beatmaker flipping samples began to make me feel a bit trapped where I wanted to elevate sample flips further than I was able to with limited musical training to fall back on. I started using more synths at the time. I wanted to elevate and/or grow and I guess just explore and do my own thing. Modular seemed to be the way to do that in a very unique, expressive and individual way.

I got my hands on my first bit of modular in 2014, reviewing a Pittsburgh Modular system for Bboytechreport. It wasn’t long after that that I knew I had to have my own system. During that time I was developing my M.O. of combining what I was discovering with my existing hip hop/boombap production techniques.

KK: It’s a style that has launched a whole genre. I love what you do, but I’m pretty beat-driven. You use modular quite differently than a lot of people I think. Can you talk a bit about your work flow?

CB: I often say “everything is vinyl!” so oddly enough I tend to fall back on my old sample techniques, especially in the beginning. I’d create soundscapes and sample them like old records, chop those samples and sequence them in the MPC. Then I progressed to using the modular rack like synths but with more modulation and unique effects. It was like instant fun and intrigue. Everything was/is new every day. I can make things I’ve never even heard before on eurorack and put those sounds into a hip hop/boombap context…[M]odular just allows me to expand creatively and it separates me from the pack in terms of developing my own sound.

Everything was/is new every day.

KK: Say more about that.

CB: I think Modular fits, for me, where I need melodic elements and maybe unstructured disruption. I love to take modular synthesis to the disruptive place because beatmaking and boombap is so structured even if you are the type to make off-grid beats or unquantized rhythms. You can patch up modules to introduce disruption and chaos. That’s what I try to achieve sometimes with modbap: that push-and-pull of structured and disruption.

KK: Modular is notoriously and sadly white. Do you think that being a person of color has influenced your modular journey, whether it’s how you learned modular, use it, or how and why you decided to develop your own line of modules?

CB: So... great question! It seems that everything I’ve done in the community from Bboytechreport and Beatppl to Modbap (the movement and the company) has been an effort to make a presence for my voice and voices like mine. We, black and brown folks, particularly from the hip hop culture, were nowhere to be found back when I started Bboytechreport. On YouTube, there was Boonie Mayfield and Saint Joe but that’s about it. So when I’d go to see reviews on gear that I was interested in, I never heard my voice. I never could find a black hip hop producer out there to tell me about the gear both from our style of production and from a technical perspective. So, one weekend in 2012, I built Bboytechreport and started on my journey. By fall I was selling ads and readership grew like crazy. That let me know that there were more folks like me out there that were interested in this hip hop tilt on music tech.

By 2014 or so I’d discovered modular synthesis by way of a couple of friends. I couldn't resist it. I decided to dive in at some point and shortly thereafter I started a YouTube web series on my channel called “Bboytech Modular Journal.” In the same spirit of how I started Bboytechreport this was an effort to take my hip hop cats on this modular journey with me as I explored and learned all about. I also hoped it would serve as a small contribution to those black and brown folks in hip hop that may eventually be modular curious. I wanted them to see me doing modular with my MPC and with my heavy muffled bass lines. I wanted my folks to know that this is a thing and you can do it too and you can still sound just as hip hop as ever when you incorporate modular. Then I named it Modbap.

At some point on my modular journey I realized there were gaps in the toolset so I learned to improvise with the tools available, as hip hop always does. All along, I realized that there were so few of us in modular. Someone even wrote an article a few years back asking where all the black guys are in modular. I also started saying things to my peers like “Why isn’t there a thing like this in eurorack?” 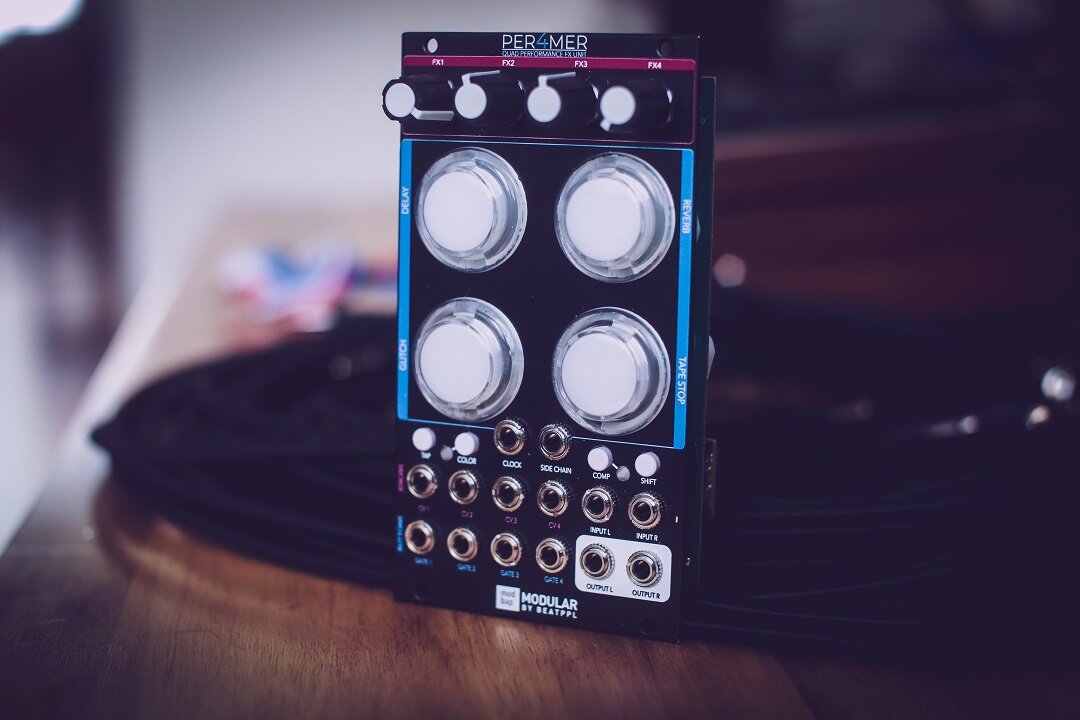 KK: So this seems like a good time to say that you’ve just announced a new module, the Per4mer. Is that when you started plotting?

CB: I started a real journal with notes for patching and drawings for modules I’d dreamt up.

CB: For a long while it just seemed like ideas and I never put much into it beside to say “we need this!” or “why doesn’t this exist?” I have a degree in electronics from the late 90’s but I’ve forgotten most of that info. I figured it would take years to really get back up to speed and then it would take time to develop my ideas. Then came March of 2019. I put together a Modbap Panel discussion at Synthplex with Voltage CTRLR, Aaron Guice of Afrorack and I brought on JStory from Output to moderate. It was a great turnout. Everything was so positive and opportunities seemed to be flowing from all angles. I went back to my day job on a high note the following Monday. On Wednesday, that job asked me to move to Kansas City to be an IT Director.

KK: I remember this. And I see you are still here in LA...

CB: The alternative was 90 – 120 days and a severance package…[which he took]. I wasn’t worried a bit. I knew that Modbap was a strong movement. So, still energized from the Synthplex events, I pulled out the modular notes I’d been sketching up and decided right then that I have up to 120 days of free time to look for a gig and I have seed money from a severance package coming at the end of that time so it was now or never. By September I’d found my way to partner with a couple of developers and began development on 3 modules, the first of which is the Per4mer.

The things [in that notebook] are now being developed in real life and folks in the know are mad excited about it. I can't help but to think it's partly because they dig what I’m making but also that my existence in the Eurorack space represents diversity and it was purely organic and not forced. I am just as much a part of the Eurorack community as I am a part of hip hop culture.

So, if my building Modbap Modular, Beatppl and Bboytechreport can serve as inspiration to young black and brown folks to embrace technology, synthesis, blogging, multimedia, etc., then I have done my job. I am walking in my purpose, unapologetically so.

KK: The first thing from that notebook to come to life is the Per4mer, available for preorder now. Those buttons! It looks incredible! Tell us more about it.

CB: The module is called Per4mer. It was inspired by the tools that I’ve used in my performances over the last year or so. I wanted to make a multifx unit that was hands on and performative, powerful and patchable with a simple and fun interface.

Per4mer includes 4 performance effects (Delay, Reverb, Glitch, Tape Stop) and 2 processing effects (Color processor & Compressor with side chain). Each of the 4 performance effects have their own set of 4 parameters controlled by the 4 knobs and/or CV inputs. It has 4 arcade buttons that can be manually engaged, latched or engaged via gate inputs. Effects can be used simultaneously or individually allowing for a huge variety of creative effects combinations.

KK: Cool. Walk us through what’s going on in the product demo video.

CB: The patch is set up to showcase the Per4mer alone. I have melodic lines from the Digitone patched into the Per4mer. It starts with no CV or Gates, just manual interaction with the effects via the arcade buttons and progresses into something more dynamic as I begin to modulate and engage effects via CV / Gate from Batumi and Time Runner in my rack.

KK: And to get an idea of the Per4mer in context, here’s a short jam. We're using the Per4mer to apply effects live to a patch: two BIAs are the bass and lead, sequenced by the Mimetic Digitalis, and an Analog Rytm supplies percussion off camera.

Are you excited about the Per4mer too? Check out the Per4mer product page for more info, ordering, and all the goods. Preorders are open now with shipping starting around 11/11/2020.

Interested in Corry? Find him in lots of places: