Modular tips: How to Succeed in Breakbeats Without Really Trying

This is part of a series of tutorials based on user questions and fun ideas. Are you new to modular and have a question about Eurorack? Are you an advanced user and have burning technical questions? Please submit ideas here.

First, introductions are in order. If you subscribe to our newsletter, you’ll have seen that we have a new employee: Markus Cancilla (on Instagram as Deathof9). Markus will be filling in on lots of blog posts as one of their many responsibilities around here.

This week, we talk Breakbeats.

First, some history: Breakbeat is a genre originating in the 90s that is primarily based around drum breaks sampled from funk records and the like, and simple, aggressive bass and melodic lines. In structure and sound breakbeat is very similar to early drum ‘n’ bass and jungle. By far the most famous drum break used in these (and other) genres is the amen break, and for the sake of familiarity that’s what I’ll be using today.

Breakbeats in Modular? WHUT. Or...what are we doing here exactly?

My goal with this system and patch was to create a small rack that could create fun, interactive breakbeats and moderately complex, modulated basslines with as little or as much input from me as I felt like while I was jamming. So let’s talk about what I’m using, why, and the prep that I did before I could actually jam this patch.

As you can see, only two of the modules in this rack actually generate sound. Then there’s a simple mixer, and the rest is all clocks and sequencing. For the actual breakbeats, I’m using a sampler, and for a bassline on top of that, I’m using the Basimilus Iteritas Alter. Basimilus is a lot of fun for basslines, but any synth voice you want can be put in. I’m using the 4MS Stereo Triggered Sampler because I like its workflow, but there are many many different sample players in Euro that could be used. The STS allows loading of samples onto an SD card in banks of 10 samples, with CV over sample selection per bank, which is the inspiration for this patch. To prep for this, I had to open up my DAW of choice, load up my drum break, and cut it at every quarter note. I chose the 10 samples I liked most (8 sequential beats and an extra kick and snare, in this case), added some limiting to bring them up to a volume I liked, faded them to avoid unnecessary clicks, and exported them at 96kHz/32-bit (STS’s preferred sample rate and bit depth) to my SD card. I used Pro Tools because it’s my favorite audio editor and can do all of these edits quickly, but any DAW will be able to do this. 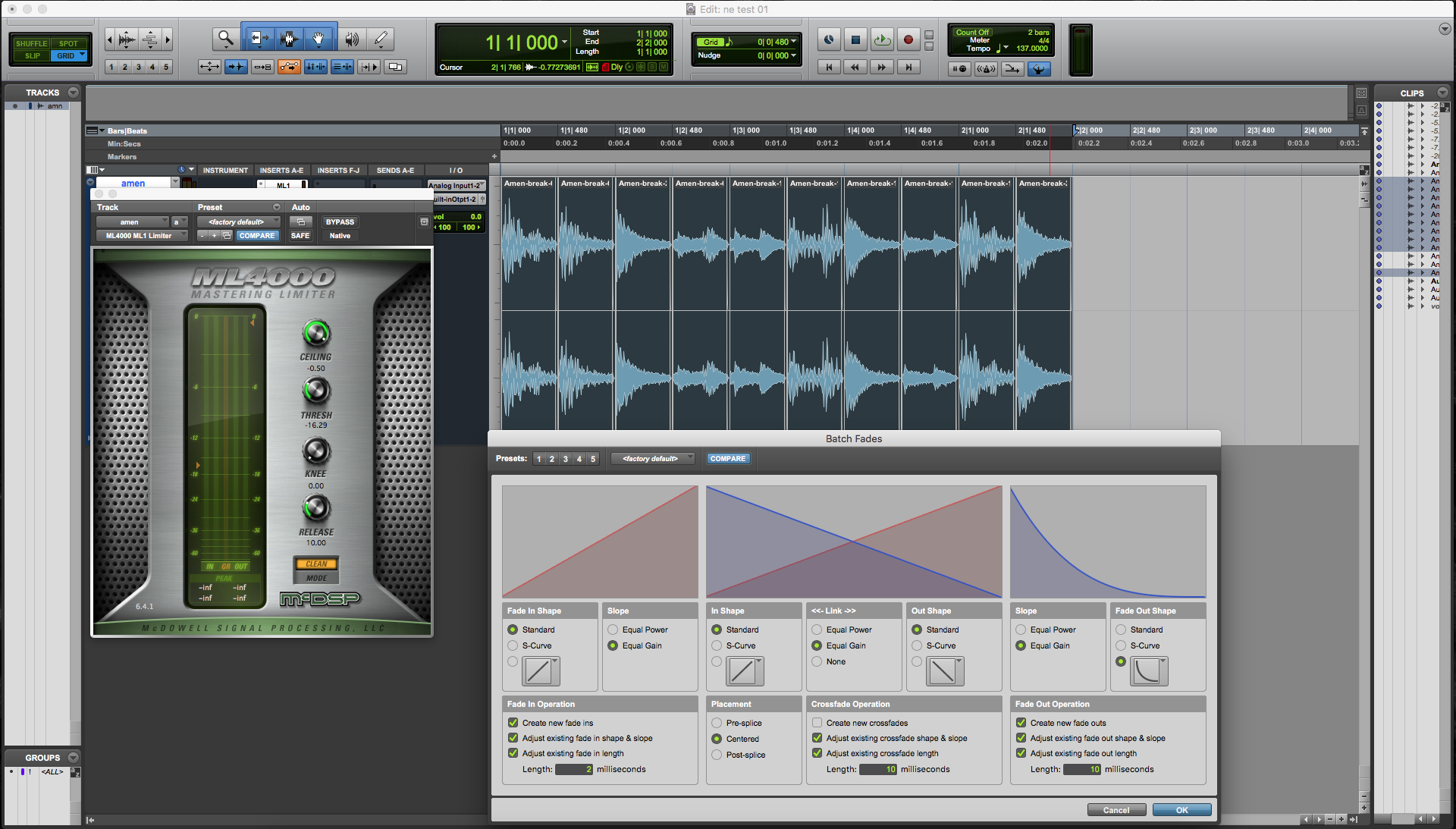 I’ve used the Amen break here because it’s iconic and a good example, but I often make my own breaks out of samples in Kontakt libraries, Battery samples, Superior Drummer… It’s a creative process, so do whatever you like! Just remember to clear your samples if you plan to release your tracks.

Anyway, back to the patch at hand. Once I had my bank of beats loaded into my sampler everything else was done in the rack, away from the computer.

Let’s first talk a bit about why I’m using so many trigger generator and sequencer modules. Going from left to right, I have the Horologic Solum, Horologic Uter, Variatic Erumption, Confundo Funkitus, Mimetic Digitalis, and my last sequencer, Bin Seq. Horologic Solum and Horologic Uter are the master clock for the whole system. In the video, you’ll see I’m using different divisions out to the Bin Seq, Mimetic Digitalis, and Variatic Erumption (but not to its clock input, only its “Hit” input; I used the VE’s internal clock because I liked the freeform sound it gave to the patch.This could easily be changed to be locked into the grid even more).

Confundo Funkitus combines the steady triggers out from the Mimetic Digitalis and the occasional bursts from Variatic Erumption to create even more variation in the drum breaks. I like these three modules because of the amount of control I get with them, but Confundo Funkitus could be replaced by a logic gate to combine triggers, and any clock source and a burst generator could be used for the same effect.

Mimetic Digitalis is patched into the STS’s Sample CV input, and via the Shred button, MD can generate chopped up breaks on its own. I’m basically using it as a controlled random source here, so a sample and hold or other random CV source could be used instead.

It’s also sequencing the Basimilus bassline’s pitch. Holding Zero+Shred on Mimetic creates random quantized voltages within one octave, so it’s great for creating melodies. I have another output patched into one of the BIA’s CV ins to create more variation in the bassline.

Any sequencer can be used for these three duties, but I like Mimetic as it lets me dial in exactly what I want when I feel like it, and randomize things when I don’t.

Lastly, Bin Seq has a relatively slow clock into it and triggers Basimilus to create a dramatic bassline. Bin Seq is very interactive, and it’s fun to change up triggers on the fly. Having 16 steps of pitch CV coming from Mimetic means that changing just a couple of triggers out of Bin Seq changes the bassline drastically.

As you see in the video, once everything is patched up and the clock starts, it pretty much plays itself. Using Shred on Mimetic lets me randomize steps until I find a beat I like and create a modulated bassline on top of it. It sounds great, and I could honestly keep playing with this patch for hours.

This is a relatively simple patch, but it’s a concept that could be greatly expanded. Using just the modules we have at hand, the final Mimetic output could be routed virtually anywhere to vary the bassline more, further manipulate the percussion, or change the bursts from the VE. The second VE channel could also be fed to the bassline to vary the rhythm further, or the entire breakbeat rhythm could be generated from clocked bursts from each channel.

Adding modules to the rack, a modulated filter over the bassline or drums (or both!) would add another level of performability and tone to the patch. Some DSP could add new dimensions to the sound; I’m particularly fond of modulated reverb or delay, which can add a pseudo-polyphonic pitch-shifting background on top of a patch.

There’s also even more that can be done with the sequencing in this patch. Using something like Mimetic Sequent to record and then manipulate the CV controlling sample selection extends our sequence from 16 to 64 steps and adds a new layer of controllable variation, which is invaluable in longer performances and patches.

Stay tuned to the Noise Engineering blog for more tips and tricks for modular users. And if you have questions you'd like to see answered here, please drop us a line.